1.A snail was mugged by a tortoise. The police said “Can you give us a description of your attacker? ………………………

The snail said, “no, it all happened so fast!” 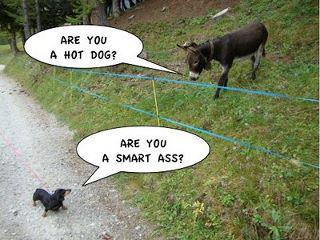 2. In the middle of a forest, there was a hunter who was suddenly confronted by a huge, mean bear.

In his fear, all attempts to shoot the bear were unsuccessful. Finally, he turned and ran as fast as he could. The hunter ran and ran and ran, until he ended up at the edge of a very steep cliff. His hopes were dim.

Seeing no way out of his predicament, and with the bear closing in rather quickly, the hunter got down on his knees, opened his arms, and exclaimed, “Dear God! Please give this bear some religion!”

The skies darkened and there was lightning in the air. Just a few feet short of the hunter, the bear came to an abrupt stop and glanced around, somewhat confused.

Suddenly, the bear looked up into the sky and said, “Thank you God, for the food I’m about to receive…”

2. A writer died and was given the option of going to heaven or hell.

She decided to check out each place first. As the writer descended into the fiery pits, she saw row upon row of writers chained to their desks in a steaming sweatshop. As they worked, they were repeatedly whipped with thorny lashes.

A few moments later, as she ascended into heaven, she saw rows of writers, chained to their desks in a steaming sweatshop. As they worked, they, too, were whipped with thorny lashes.

“Wait a minute,” said the writer. “This is just as bad as hell!”

“Oh no, it’s not,” replied an unseen voice. “Here, your work gets published.”

Select a Blog Category to Read

3 Ways to Improve Concentration Level as a Freelancer.

5 Steps to Writing a Business Article Like a Pro

K.I.S.S. or keep it simple silly. An abbreviation from my MBA days, that's stuck with me for obvious reasons :) What a clever play of words to grab attention and convey a simple truth. At times, the analysis does lead to paralysis, so when you are inundated with information and are unable to make a decision, just focus on the simple facts. Everything else ( all the if and buts) can be worked around that one important decision that you take. K.I.S.S applies to your personal life as much as it applies to every complex decision you are faced with in business or your professional life.
I am a firm believer that sometimes all it takes is one good day to recharge the spirits and kick in the motivation you may have been lacking. The trick is making that one good day happen. The elements of procrastination, self-doubts and time constraints will exist as long as we allow them to dominate our mindset. And while overcoming your challenges to start a business or making that needed career change is a long-drawn-out process, sometimes you just need to make an effort on that one good day to get started, to put your ideas into action. Sit down to strategize your next move, speak to someone who is a business owner, revamp your LinkedIn profile, hire a website designer, or watch at least 20 YouTube videos on a relevant topic to broaden your awareness - all of these can be done in one day. So what is going to be for you? I hope you have that 'one good day' soon!
Some posts dont need much of an explanation. This is one of those! It's your life, make it large. Make time for things that matter to you - both professionally as well as personally.
Mind over matter: Starting a business is really a case of mind over matter. You have so much to think, do and achieve every day, that the whole process seems rather chaotic. Having a business plan and a workday plan, along with a " can-do " attitude will go a long way in ensuring that you keep on the path of progress and don't get demotivated/ or feel lost by the many things demanding your attention. And if there comes a moment, when the going really does seem tough, step away from your desk, or computer and put away your phone - take some time out to reflect on why you wanted to start this business and focus your thoughts on why what you do today matters to the future of your business.
If you want to start a business or achieve an important goal in life - you really have to go all in. Plans on paper need to be executed in thought and action both. The mindset for change is as important as the consistency of effort. 'All or nothing' is a reminder that unless you give it your all, nothing is going to change.
Be it fitness goals or your business goals, you have to 'burn it to earn it." You need to go beyond your comfort zones to get your physique, life, and business in better shape than it is today. As they say, nothing comes easy, but it certainly gets easier when you show up consistently and do the hard work.